Switch to the dark mode that's kinder on your eyes at night time.

Switch to the light mode that's kinder on your eyes at day time.

A respected Imam named Sheikh Mohammed Mutumba in Kayunga District, Uganda was left shell shocked when he discovered that the woman he married barely two weeks turned out to be a man. 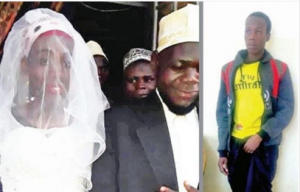 Sheikh Mohammed Mutumba and the suspect

According to reports, he was said to have married the said wife, Ms Swabullah Nabukeera briefly after meeting in the mosque with no sexual intercourse.

Also, during the period of the marriage, the supposed wife claimed to be menstruating.

However, luck ran out of her when after one of their neighbours claimed he saw the newly wedded wife jumping over a wall to his valuables.

The neighbour then reported at the police station before detectives were dispatched to arrest Ms Nabukeera.

What do you think?

Browse and manage your votes from your Member Profile Page

Be the first to get notified on the latest articles.

Talk About Mag is a platform for handpicked content and bold opinions! For the Amebos, Debaters & the generally Curious.

Back to Top
Close

Your password reset link appears to be invalid or expired.

To use social login you have to agree with the storage and handling of your data by this website.